A report by a pharmacist claiming to have found one capsule of the antiarrhythmic agent Tikosyn (dofetilide) in a bottle of Effexor XR (venlafaxine HCl extended-release capsules) has prompted Pfizer to initiate a recall of three of its products. This voluntary recall includes one lot of 30-count Effexor XR 150mg capsules, one lot of 90-count Effexor XR 150mg capsules, and one lot of 90-count Greenstone LLC-branded Venlafaxine HCl 150mg extended-release capsules. While the probability of other bottles of Effexor XR containing Tikosyn capsules remains very low, and no other reports have been received, Pfizer has initiated the recall as a precaution.

Tikosyn is a Class III antiarrhtyhmic drug that is indicated for the treatment of atrial fibrillation (AF) and atrial flutter (AFL) and is used to maintain normal sinus rhythm in patients with AF or AFL of greater than one week duration who have been converted to normal sinus rhythm. Effexor XR is an antidepressant approved for the treatment of major depressive disorder, general anxiety disorder, social anxiety disorder, and panic disorder with or without agoraphobia. The use of Tikosyn by a patient taking Effexor XR could cause serious adverse effects, including Torsade de Pointes, for which the consequences could be fatal.

This recall is to the patient level and involves the following lots:

Pharmacists should immediately quarantine, discontinue distribution of, and return all recalled lots of these products. Customers who may have received medication from affected lots should be notified. 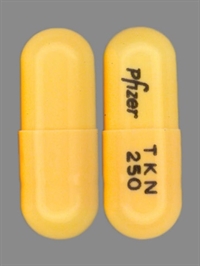