Parental knowledge of adolescent vaccine requirements may be severely lacking, according to a new national poll.

A report from the C.S. Mott Children’s Hospital National Poll on Children’s Health at the University of Michigan surveyed 614 parents having at least one child aged 13–17 years. The results from the poll showed that over 1/3 of these parents did not know when their child’s next vaccine was required. Approximately half of the parents also assumed that their physician would initiate an appointment at the appropriate time. Moreover, >90% of the polled parents believed their child had received all the necessary vaccines for their age. 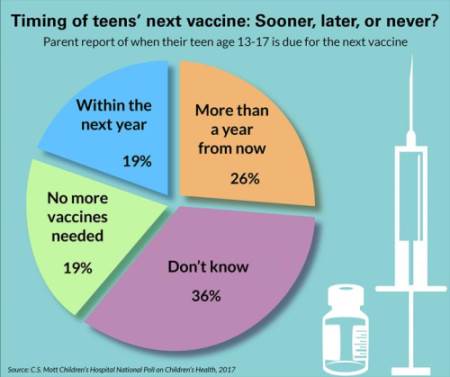 Surveyed parents reported that an appointment scheduled by the provider (44%), mentioning vaccination during an office visit by a clinician (40%), or a reminder sent by the clinician’s office (11%) were the primary methods by which they were informed of the need for additional vaccines. Receiving alerts from their child’s school, health plan, or the public health department were reported as less frequent by the parents.

Sarah Clark, MPH, co-director of the poll, explained, “As children get older, well-child appointments occur less often and health providers may not address vaccines during brief visits for sickness or injury. Many teens may be missing out on important vaccines simply because families aren’t aware it’s time for one.”

The findings from this national poll indicate that many parents are still uncertain about the required vaccines for their teens. This lack of awareness may influence changes to the adolescent vaccination schedule in the coming years. “Given the general lack of awareness about adolescent vaccines shown in this poll, there is a clear need for providers to be more proactive for their teen patients.”