The World Health Organization (WHO) has issued its first report on suicide prevention to increase awareness of suicide and suicide attempts, as well as urge governments to develop comprehensive suicide prevention strategies. The report stems from the Mental Health Action Plan of the WHO in May 2013, with a goal of reducing suicide rates worldwide by 10% by the year 2020.

It is estimated that 804,000 suicide deaths occurred globally in 2012, accounting for 1.4% of death worldwide as the 15th leading cause of death. However, due to cultural and legal factors in certain countries, it is highly likely that these deaths were underreported or misclassified as another cause of death such as accidental death. Suicides account for 50% of all violent deaths in men and 71% in women worldwide, with the highest rates seen in men and women ≥70 years of age. While the most common methods are pesticide injection, hanging, and firearms, these vary based on population groups.

RELATED: Suicide Tourism on the Rise in Switzerland

The report also outlines universal, selective, and indicated strategies necessary to reduce risk factors and rates of suicide including: 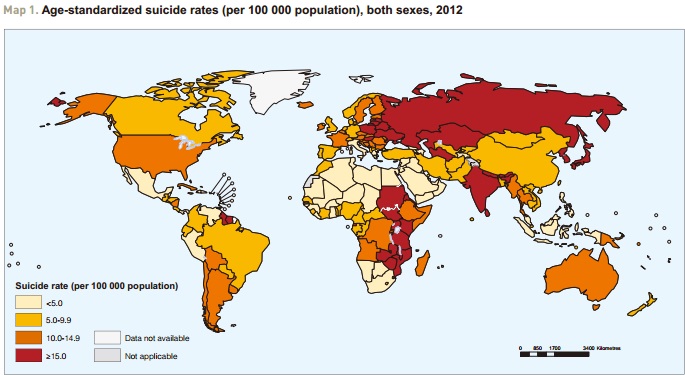