The Centers for Disease Control and Prevention (CDC) announced the CDC nowcast model, a new website to help predict the spread of chikungunya in the Americas.

In a study published in the journal PLOS One, the CDC model accurately predicted eight of the 10 countries where local chikungunya transmission occurred in the four months following the Caribbean outbreak in December of 2013. The model has subsequently correctly predicted the likelihood of chikungunya virus transmission introduction to most locations, either before or at the time of the first reporting of cases of the illness. However, it does not predict the severity of possible local outbreaks, the spread of chikungunya virus from areas outside of the Americas, the spread of other mosquito-borne viruses, or the impact of mosquito prevention activities.

The nowcast website provides health officials worldwide with information on the optimal times for educational and public health outreach efforts to the public and healthcare providers through identifying timeframes and locations where chikungunya introduction and spread is likely to occur. The goal of the tool is ultimately to help health departments worldwide make informed decisions on reducing chikungunya’s impact in their communities, stated Michael Johansson, PhD, a CDC biologist and the developer of the model.

The website will be updated monthly with the most recent month’s estimates as a range of probabilities based on varying model scenarios. Cities with a probability of ≤10% will not appear on the website. 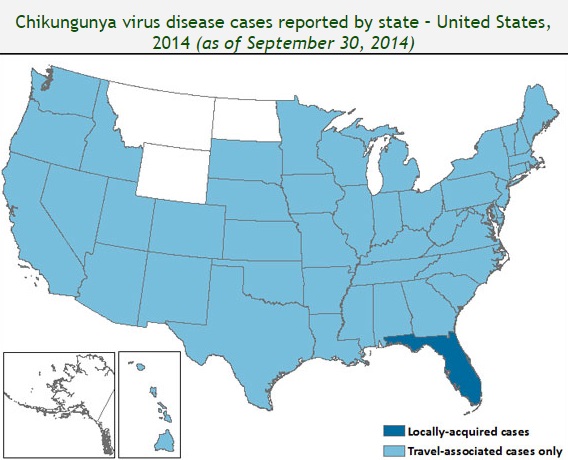 Image courtesy of the CDC