LAS VEGAS—Methadone is not an appropriate pain treatment option for all patients and its complicated pharmacokinetics, metabolism and drug interactions necessitate careful patient selection and conversion.

“Remember that methadone represented less than 5% of the total number of opioid prescriptions between 2002 and 2008, but was implicated in approximately 33% of opioid-related deaths,” said Jeffrey Fudin, PharmD, DAAPM, and FCCP, Adjunctive Associate/Assistant Professor at Western New England University and the University of Connecticut colleges of pharmacy.

Methadone is prescribed for pain management when pain is “severe enough to require daily, around-the-clock, long-term opioid treatment and for which alternative treatment options are inadequate,” explained Mary Lynn McPherson, PharmD, MA, BCPS, CPE, FASSPE, Professor and Vice chair of the University of Maryland School of Pharmacy.“It is not for use post-operatively, for ‘PRN’ or occasional use, or for mild or transient pain,” Dr. McPherson emphasized.

Patients with very limited prognosis – anticipated survival time of less than 1 week – a history of syncope or heart arrhythmias, a history of nonadherence to therapy plans, or numerous drug interactions with methadone, are inappropriate candidates for methadone pain therapy. So are those who live alone with poor cognitive functioning, who seem unreliable or uncomprehending of clinician instructions, she cautioned. 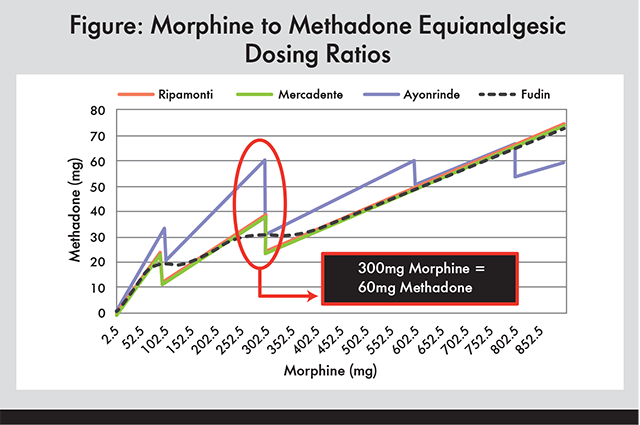 Steady-state methadone concentrations are achieved in about five days. “Respect the long and variable terminal half-life (and) do not adjust the dose before 4-7 days,” said Dr. McPherson.During transition, therapeutic effectiveness and potential new or worsening toxicity should be carefully monitored. Changes in the depth, rhythm or rate of respiration, difficulty awakening, and snoring are signs of opioid overdose.

At high doses, methadone can have cardiotoxic effects, prolonging the QTc interval and potentially increasing risk of torsade de pointes, a form of ventricular tachycardia, Dr. Fudin cautioned. “Certain drugs, personal or family history, and comorbid conditions can potentiate this,” he noted.“Methadone has multiple drug interactions, and this should be reconciled for each individual patient.” Erythromycin, quetiapine, cocaine, and tricyclic antidepressants like amitriptyline, desipramine, and imipramine, can also prolong QTc, Dr. McPherson said.

“Certain CYP450 3A4 inhibitors and inducers can significantly increase or decrease methadone concentrations by up to 50%,” Dr. Fudin said. The list of such enzyme inhibitors and inducers is long. It includes rifampicin/rifampin, rifabutin, phenobarbital, phenytoin, carbamazepine – even St. John’s Wort.In addition, atypical antidepressants and protease inhibitors like telaprevir, which is used to treat chronic hepatitis C infection, can have “sneaky interactions” with methadone that might go unnoticed during routine clinical visits or hospitalizations, Dr. Fudin said.