LAS VEGAS—Urine drug testing (UDT) can be an important tool in risk evaluation and mitigation strategies (REMS) when used in a patient-centered fashion and it is done “for the patient” rather than “to the patient,” according to Howard A. Heit, MD, clinical pain and addiction specialist and assistant clinical professor at Georgetown University in Washington, DC.

UDT is a consensual diagnostic test, and its purpose in clinical practice is to provide objective documentation of adherence to mutually agreed upon treatment plans; aid in the diagnosis and treatment of the disease of addiction or drug misuse, if present; and to advocate for the patients in family and third-party issues. Dr. Heit explained that UDT, which can demonstrate recent use of prescription medications and illegal substances, has an increased window of detection compared with blood testing, typically one to three days for most drugs and/or their metabolites. It is less expensive and less invasive than blood tests. However, UDT provides only a snapshot of drug use at a specific moment in time, and results do not provide sufficient information to determine exposure time, dose, and frequency of use. Nor can it diagnose impairment, physical dependence, drug addiction, or diversion, although it can open up a differential diagnosis to consider.

For patients being treated for addiction (“established high risk”), clinicians should conduct urine drug testing as frequently as necessary to document that a patient is adhering to a mutually agreed upon treatment plan, according to Dr. Heit. For pain management (“apparently low risk”), random testing two or three times per year may be adequate, but if the patient is displaying aberrant behavior, boundaries should be tightened and the frequency increased.

Initial UDT may be done with class-specific immunoassay drug panels, which typically do not identify individual drugs within a class. This is followed by a combination technique such as gas chromatography (GC) and mass spectrometry (MS) to identify or confirm the presence or absence of a specific drug and/or its metabolites. GC/MS or other combined chromatographic tests can identify specific opioids and/or their metabolites. He emphasized that in a pain practice, specific opioids must be identified, not just the class of opioids. Clinicians should specify “no threshold” or “limit of detection” testing to reduce the likelihood of false negatives, especially for oxycodone, oxymorphone, hydrocodone, and hydromorphone. In addition, doctors should establish one or more routine urine drug testing panels. Dr. Heit recommends the following drugs or drug classes for screening immunoassay: cocaine, opiates, PCP, marijuana, amphetamines (including ecstasy), and benzodiazepines. Additional tests may be added as needed, he said.

An important consideration in UDT is the drug-class-specific windows of detection, a measure of how long after ingestion a person may be expected to remain positive for a given drug or metabolite. This is affected by a number of factors, including dose, route of administration, metabolism, urine concentration, and urine pH. Drugs vary in their retention times (see Table). Interpretation of retention time must take into account variability of urine specimens, drug metabolism and half life, and patients’ physical condition, fluid intake, and method and frequency of ingestion. 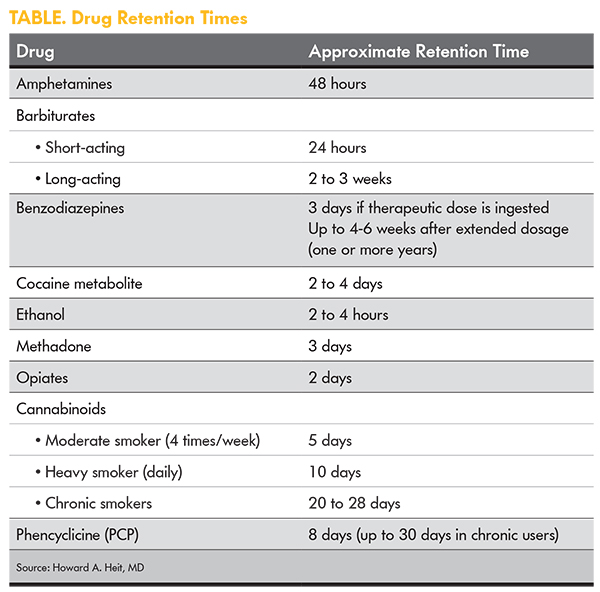 When urine tests give abnormal or unexpected results, clinicians should schedule an appointment with the patient and use the results to strengthen the physician-patient relationship. UDT should increase—not decrease— communication between the patient and the prescriber.

Caveats to interpretation Dr. Heit also summarized some caveats to the interpretation of urine drug testing results. For example, patients prescribed large amounts of codeine may show trace quantities of hydrocodone unrelated to the use of that drug. Patients prescribed hydrocodone may have hydromorphone (a hydrocodone metabolite) detected. Patients prescribed morphine may produce small quantities of hydromorphone as a metabolite. In addition, Dr. Heit pointed out that there are legitimate reasons for a positive urine test result. These include use of legally prescribed or over-the-counter medications, ingestion of a substance that produces the same metabolites as the identified substance, such as poppy seeds, and errors in the laboratory analysis.