LAS VEGAS—Myofascial pain syndrome (MPS) is a legitimate diagnosis, 88.5% of respondents to a survey of US members of the American Pain Society with medical or chiropractic degrees have agreed. MPS is a chronic pain disorder caused by stimulation of myofascial trigger points that results in muscle, sensory, motor, and autonomic nervous system symptoms in seemingly unrelated areas of the body.

Though MPS may be one of the most difficult diagnoses to differentiate from fibromyalgia, among the 403 respondents—of 1663 surveyed—81.0% also agreed MPS “should be considered a disorder distinct from fibromyalgia.”

R. Norman Harden, MD, Medical Director of the Center for Pain Studies at the Rehabilitation Institute of Chicago, Chicago, Illinois, reported the survey comprised a questionnaire that assessed “31 signs and symptoms mentioned in the literature as characteristic of MPS.” The impetus for the survey arose from lack of an “ideal” diagnosis for MPS; that is, no exact pathophysiology of the disease or a sensitive and specific “gold standard”test for that pathophysiology.

Respondents rated the importance of each of the 31 signs/symptoms as being “essential,” “associated,” or “irrelevant” to a diagnosis of MPS; the top 10 replies for “essential” and “associated” are included in Table 1. The only two signs and symptoms that both appeared in the top 10 were “dull/achy pain” and “pain that decreases with spray/stretch.” 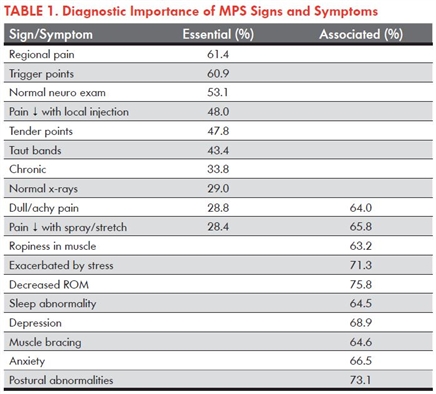 Dr. Harden outlined proposed research criteria for MPS, with the diagnosis “confirmed” by complete relief by injection of local anesthetic. All four of the following criteria must first be met:

He concluded with a comparison of MPS and fibromyalgia: MPS is regional, posttraumatic, involves trigger points and, perhaps, an affective diagnosis. In contrast, fibromyalgia is diffuse/ systemic, idiopathic, and involves tender points as well as depression and insomnia.