Unintentional poisoning mortality rates—including from prescription opioids—had increased in North Carolina over the past decade, as did unintentional poisoning morbidity rates, reflected in emergency department visits. Data also showed 10% of newborns in Wilkes County suffered from neonatal abstinence syndrome, denoting chemical dependence, 77% of whom were treated under Medicaid.

These findings led to the development of the Project Lazarus model, which can be conceptualized as a wheel, with three core components— public awareness, coalition action, data and evaluation—forming “The Hub,” which must always be present, and seven other components (see Figure) that can be initiated based on the specific needs of a community. 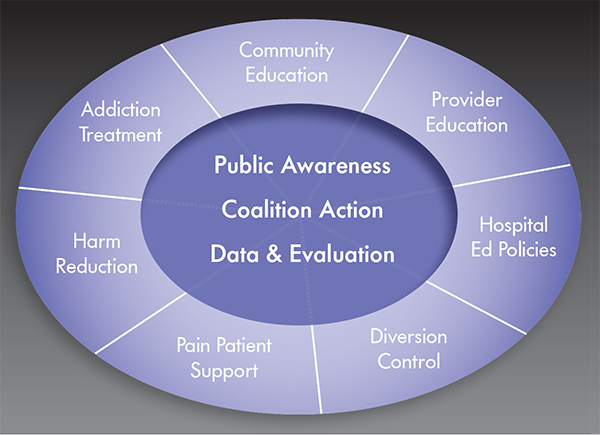 “Public awareness is particularly important because there are widespread misconceptions about the risks of prescription drug misuse and abuse,” Brason said. “It is crucial to build public identi cation of prescription drug overdose as a community issue. That overdose is common in the community, and that this is a preventable problem must be spread widely.”

Coalitions should form strong ties and garner support from key sectors of the community in order to make strategic plans and design locally appropriate interventions for substance abuse and diversion. Brason states that locally designed programs have more legitimacy than those produced at a national level. Coalition leaders should clearly understand the nature of the issue in the community and the tactics to address it.

Epidemiological data collection of unintentional overdoses and relevant health information allow for evaluation and pro ling of substance abuse patterns in the community to determine the need to initiate any or all of the seven components of “The Wheel.” The non-profit organization provides training and technical assistance to community groups and clinicians throughout North Carolina and beyond. Communities with a coalition led by the health department have shown a 23% lower rate of emergency department visits for substance abuse (P=.03) than communities with no coalitions.

Project Lazarus, which has a number of sponsors, from the US Army to corporate and academic partners, “believes that communities are ultimately responsible for their own health and that every drug overdose is preventable,” Brason said.