Bronchiolitis is the most common lower respiratory tract infection that affects children in the first two years of life and the most common reason for hospitalization in this age group.1 Rhinitis — the inflammation of mucus membranes lining the nasal passages — is characterized by one or more of the following symptoms: nasal congestion, nasal pruritus, postnasal drip, rhinorrhea, and sneezing. These symptoms are frequently accompanied by itchy eyes, ears, and/or throat.1

Allergic rhinitis is the sixth most prevalent chronic illness in the United States, affecting as many as 40 million adults and children every year.2 Worldwide, it is estimated that 10% to 30% of adults and up to 40% of children are diagnosed with allergic rhinitis, making it the most chronic pediatric condition.3 The prevalence of allergic rhinitis has increased substantially in recent decades in developed countries.4 However, only about 43% of affected patients have a pure allergic component to their rhinitis. Approximately 23 % have a nonallergic (vasomotor) rhinitis component, and 34% have a mixed component (both allergic and nonallergic).5

Screening for rhinitis leads to a more precise diagnosis. To help differentiate between the various forms, include a comprehensive history and physical exam along with information about patterns of disease, chronicitiy, seasonality, and magnitude of symptoms. Obtain detailed information about the presence of triggers or allergens in the home, school, workplace, or environment. Examples of potential irritants include paint fumes, tobacco smoke, perfume, car exhaust, cold or damp weather, alcoholic beverages, and spicy foods. Finally, ask when the symptoms first appeared. 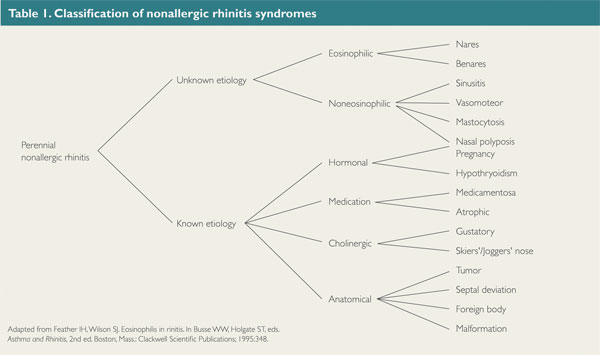 There are several ways to determine whether an individual’s rhinitis is allergic or nonallergic, including a skin-prick test or a simple blood test.6 Many laboratories still use allergen-specific immunoglobulin E testing (commonly known as a radioallergosorbent test [RAST]). However, the RAST has been replaced by the more sensitive fluorescent enzyme-labeled assays, of which the ImmunoCAP is most common.7 All of these tests will help identify possible allergic triggers.

A simple questionnaire called a Patient Rhinitis Screen may be useful. This tool asks the patient about symptoms and what time of the year they occur. The questionnaire also asks about allergens and irritants that can cause rhinitis symptoms. An individual with only allergen triggers could indicate a pure allergic rhinitis; if only irritant triggers are noted, it could be nonallergic rhinitis; if both types of triggers are identified, a mixed type of rhinitis is the likely diagnosis.

The best treatment for rhinitis is allergen and/or irritant avoidance along with environmental controls. These non-pharmacotherapeutic options will work better for known and easily avoidable triggers. This treatment choice will work for such triggers as indoor pet dander, mold, dust mites, and cockroaches. However, it is very difficult to avoid such irritants as weather changes, strong odors, and environmental triggers, especially in the workplace or in large cities.