On average, 5% to 20% of the United States population develops influenza each year according to the US Centers for Disease Control and Prevention (CDC). This leads to more than 200,000 preventable, complication-related hospitalizations.1 An affordable way to prevent diseases such as influenza, commonly known as the “flu,” is to administer vaccinations. Currently, most patients receive their annual flu vaccine from their primary healthcare provider. During the peak months of the flu season, physicians have an added responsibility to administer influenza vaccines, which may become a challenge with conflicting patient and office schedules along with high demand for the vaccine. To close this gap in care is the community pharmacist—a more readily available healthcare provider for patients.

Figure 2 shows the percentage of the US population who were vaccinated in the 2010/2011 flu season, demonstrating that a large amount of the population is not getting vaccinated and, as a result, there is a need to increase vaccination rates. 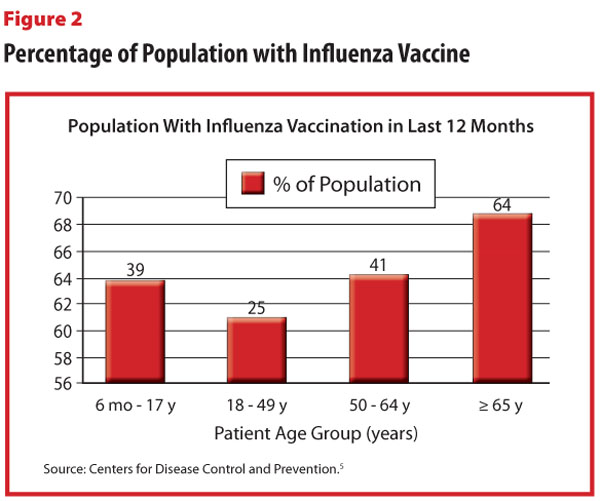 Pharmacists can play a role as advocates, partners, and providers of immunization to improve vaccination awareness. In this multifaceted role, pharmacists may help increase public knowledge of vaccines and dispel common myths about them; work with nurses and other healthcare providersto advocate immunizations; and also administer vaccines to help increase vaccination rates.6