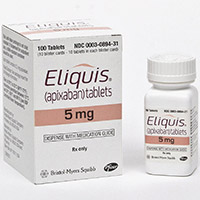 Indication: Apixaban (Eliquis) is indicated for patients with nonvalvular atrial fibrillation to reduce the risk of systemic embolism and stroke.1

Pharmacology: Apixaban works by selectively and reversibly inhibiting factor Xa, which aides in the conversion of prothrombin to thrombin, and which ultimately leads to the conversion of fibrinogen to fibrin. Therefore, apixaban does not directly inhibit platelet aggregation but, rather, indirectly affects platelet aggregation induced by thrombin, decreasing thrombin development and thrombus formation.1

Clinical Trials: Two international, randomized, double-blind trials compared the efficacy and safety of apixaban vs aspirin2 and warfarin.3 In the AVERROES (Apixaban Versus Acetylsalicylic Acid [ASA] to Prevent Stroke in Atrial Fibrillation Patients Who Have Failed or Are Unsuitable for Vitamin K Antagonist Treatment) trial, patients deemed unsuitable to receive vitamin K antagonist therapy were randomly assigned to either an 81 mg to 324 mg daily aspirin, or to 5 mg twice daily apixaban.2

In the ARISTOTLE (Apixaban for the Prevention of Stroke in Subjects With Atrial Fibrillation) trial, more than 18,201 patients with atrial fibrillation and at least 1 risk factor for stroke were assigned either to apixaban 2.5 mg twice daily, or warfarin 2 mg, with dose depending on patients’ ability to maintain a target International Normalized Ratio (INR) of 2.0 to 3.0. The study found that the rate of hemorrhagic stroke was 0.24% per year in the apixaban group, as compared with 0.47% per year in the warfarin group (hazard ratio, 0.51; 95% CI, 0.35 to 0.75; P<0.001).3

Warnings/Precautions: Apixaban should be avoided in patients with severe hepatic impairment (Child-Pugh Class C) or patients with a CrCl <15 mL/minute or on dialysis. Use with caution in patients with mild to moderate hepatic impairment (Child-Pugh Class A or B) and with patients with a CrCl 15-29 mL/minute, as apixaban exposure has been shown to increase in renal-impaired patients. Use with caution in patients with increased risk of bleeding such as: those taking drugs affecting hemostasis; recent major bleeding; recent vessel puncture; organ biopsy; prior hemorrhagic stroke; or active gastrointestinal ulcer. Discontinue apixaban and locate the bleeding source if patients present with severe hemorrhage while receiving apixaban therapy.

The Food and Drug Administration black box warning states that “discontinuing [apixaban] places patients at an increased risk of thrombotic events. An increased rate of stroke was observed following discontinuation of [apixaban] in clinical trials in patients with nonvalvular atrial fibrillation. If anticoagulation with [apixaban] must be discontinued for a reason other than pathological bleeding, coverage with another anticoagulant should be strongly considered.”1

Although no antidote currently exists for apixaban, activated charcoal has been shown to decrease the rate of apixaban absorption and should be used if ingestion occurred within the past 2 to 6 hours upon presentation. While not evaluated during clinical trials, prothrombin complex concentrate (PCC) or recombinant factor VIIa should be considered in the event of apixaban-related hemorrhage.1

Pregnancy: Apixaban is a pregnancy category B drug. However, it is believed that treatment can increase the risk of hemorrhage during pregnancy and delivery; therefore, apixaban should be used in pregnancy only if benefits outweigh risks.1

Adverse Reactions: The most common adverse effect associated with apixaban is bleeding. There is currently no antidote to reverse the anticoagulant effects of apixaban. Patients should be taught signs and symptoms related to blood loss and instructed to go to the emergency room upon noticing any blood loss.1

Drug Interactions: Apixaban is a P-gp and CYP3A4 substrate. As such, caution should be used when using CYP3A inducers as they can decrease apixaban plasma levels, increasing stroke risk. Similarly CYP3A4 inhibitors can predispose patients to increased apixaban plasma levels and consequently increase bleeding risk. Therefore, caution should be exercised when using CYP3A4 inhibitors in patients taking apixaban. When coadministering apixaban with strong dual CYP3A4 and P-gp inhibitors such as ketoconazole, clarithromycin or ritonavir, decrease patients’ dose to 2.5 mg twice daily. If a patient is already on a 2.5 mg twice-daily dose, avoid concomitant use. Concomitant use with dual strong CYP3A4 and P-gp inducers such as carbamazapine, or phenytoin, should be avoided. Additionally, any concomitant use with anticoagulants should be avoided as they may increase the anticoagulant effects of apixaban. Monitor patients taking medications with antiplatelet properties, such as SSRIs and NSAIDs.1

Dosage and Administration: According to the manufacturers, the recommended starting dose for apixaban is 5 mg twice daily, unless patients present with any 2 of the following: serum creatinine ≥1.5 mg/dL, ≥80 years of age, or a weight ≤60 kg, in which case the dose should be reduced to 2.5 mg by mouth twice daily.