Ms. M, aged 64 years, was referred to our clinic with an enlarging right renal tumor. The tumor was incidentally detected on ultrasound, which her primary-care provider (PCP) ordered in response to her nonpalpable ovaries.

Ms. M had undergone two surgeries to repair a detached retina and had a negative breast biopsy. The patient did not complain of abdominal or flank pain and reported no chest pain, shortness of breath, hematuria or melena.

During a normal pelvic exam, Ms. M’s PCP could not feel her ovaries and ordered an abdominal ultrasound, which revealed a tumor on the right kidney. The tumor was initially diagnosed as an angiomyolipoma.

Four months later, a second ultrasound confirmed an 8-mm echogenic nodule. A triphasic renal CT with IV contrast ordered nine months later to confirm the angiomyolipoma revealed a fat-poor, hypovascular tumor that enhanced from 34 to 70 Hounsfield units. The mass was located in the lateral cortex of the right kidney, and in comparison with previous ultrasound studies, appeared to have more than doubled in size to 1.6 cm (Figures 1 and 2). 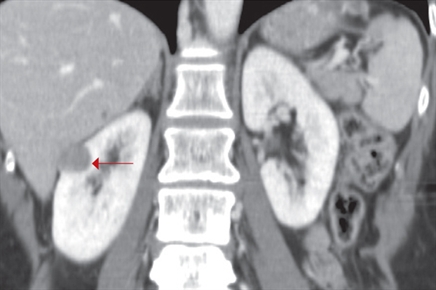 The radiologist felt that this tumor was unlikely an angiomyolipoma and would not rule out renal cell carcinoma until proven otherwise. A 3- x 5-mm cyst in the mid-pole of the right kidney and a 1.6 cm hepatic cyst in the right lateral lobe of the liver were also noted on CT.

Prior to Ms. B’s first referral appointment, the case was presented to a multidisciplinary small kidney tumor conference for review by urologists, pathologists, and radiologists. The physicians unanimously dismissed the possibility of an angiomyolipoma after review of the CT scans. The decided diagnosis was renal cell carcinoma.