Mrs. P, aged 63 years, is an energetic and right-hand- dominant grandmother who enjoys woodworking and frequently uses table saws and other mechanical tools. Two years ago, she was cutting wood with a miter saw in her basement when she looked down on the ground after “feeling something” and saw her hand and part of her arm lying on the floor.

Instantly, she crawled upstairs, looked outside, saw someone, and called out for help. A stranger walking by came to her assistance. While applying direct pressure to Mrs. P’s residual limb, the good samaritan called 911.

The paramedics arrived quickly, wrapped the limb in nonadherent sterile gauze dressing, and continued to apply pressure to control the bleeding. An IV solution of sterile saline was initiated as well.

Mrs. P arrived in the trauma bay less than one hour after sustaining her injury. The medics did not bring the amputated limb to the emergency department (ED). A next-door neighbor placed the limb in a plastic bag before following the medics to the ED and giving the amputated limb to the trauma staff (Figures 1 and 2). The limb was then irrigated with sterile saline, wrapped in saline-soaked sterile gauze, placed in a plastic bag, and put in a tub of ice. Figure 1. X-rays show the amputated appendage after arrival in the trauma bay 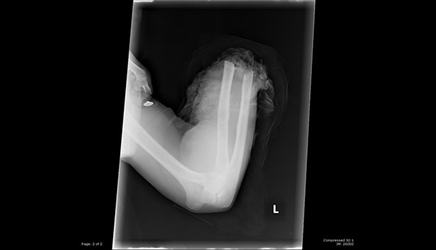 Mrs. P’s medical history was positive for hypertension, but she had stopped taking her medication because of the high cost. She had an otherwise unremarkable medical and surgical history. She denied drinking alcohol or taking illicit drugs, and her toxicology screen was negative.  Mrs. P’s history was positive for tobacco use (one pack day for more than 30 years). The patient also reported that she drank several cups of coffee per day and ate chocolate almost daily.

On examination, Mrs. P was alert and oriented but slightly lethargic due to pain medication administered in the ED. Her vital signs were stable but slightly hypertensive. Her lungs were clear, and her heart rate, heart rhythm and ECG were normal. Serum lab tests and urinalysis were normal.

The amputated hand was appropriately preserved, and at the one-hour mark, the fingertips were just slightly dusky. Both distal and proximal edges of the amputated arm were ragged with exposed bone.

Treatment in the trauma bay consisted primarily of ruling out any other injuries, inserting a Foley catheter, updating Mrs. P’s tetanus immunization, and administering IV antibiotics and aspirin. A hand surgeon outlined two possible treatment options and described the risks and benefits of both.

The first option was a revision amputation that would be completed mid-forearm. Mrs. P would eventually need a prosthesis, which might be unaffordable given her limited budget. The second option was a replantation. This would require Mrs. P to consent to a long surgical procedure, make a firm commitment to change her dietary habits, immediately quit smoking, and agree to long-term intensive therapy sessions.

Mrs. P was adamant in her decision: She wanted to try to save her arm, no matter the outcome, and she would do whatever was asked of her in return.

The patient was taken to the operating room (OR) to begin what became an eight-hour procedure. Surgery was prolonged in part due to two episodes of arterial thrombosis that were likely attributable to Mrs. P’s smoking. General anesthesia was initiated along with a brachial block. Standard prepping and draping procedures commenced.

The radius and ulna were initially stabilized with plate-and-screw fixation after trimming, shortening, and realignment (Figures 3 and 4). Surgery continued with tendon repair using both Teno Fix (an intratendinous soft-tissue anchoring device) and cruciate-X suture methods. The 3-cm shortening of the bones helped with the repair. The Teno Fix tendon-repair device results in lower rupture rates and similar functional outcomes when compared with conventional repair.1  Teno Fix was utilized in four locations. The basilic vein was then repaired end-to-end using a microscope and microsurgical instruments. Once this repair was completed, the ulnar nerve and artery were repaired. The remaining tendons, including the sublimus, brachioradialis, and extensor tendons, were repaired next. Reduction and pinning of the proximal interphalangeal joints of the fingers was carried out to prevent early contracture caused by the loss of intrinsic muscle function.

Controlled motion (passive and subsequently active) is necessary to prevent: (1) rupture of repaired structures, (2) tendon adhesions, and (3) joint contractures. Loose closure was carried out, noting no constriction at the transection site. A dressing and splint were applied to the wound.

The patient was transported to the post-anesthesia care unit, and her hand was elevated at heart level. She was started on an  IV heparin drip to maintain vascular patency after the declotting of the arterial thrombosis. Warming lights were used to keep the extremity warm as well.

Mrs. P’s hospital stay was uneventful. She was discharged on postoperative day 4. At that time, occupational therapy was already in progress, and range-of-motion exercises had been initiated. At home, she maintained her strict caffeine-free diet (including abstaining from chocolate). She stopped smoking and took aspirin as instructed (81 mg per day for two months).

With each clinic visit, motion improvement has been shown (Figures 5 and 6). Mrs. P was extremely compliant with her occupational therapy. Her neural/sensory recovery progressed, and gabapentin (Neurontin) was initiated for burning pain, which subsequently abated. Figures 5 and 6. Five-month follow-up shows arm extension after repair and a subsequent x-ray.

Survival of an amputated upper extremity is a difficult outcome to achieve and is dependent on microvascular patency of the arteries and veins.2 Ultimate function is determined by the outcome of the tendon, nerve, bone, and joint repairs.